How to Spot and Solve Implicit Language Bias in International Contracts 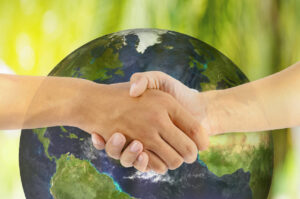 You can connect with Nada at www.nadaalnajafi.com and follow her contracts insights at contractnerds.com

Contract drafters[1] spend a considerable amount of time crafting the perfect clause. Every word in a contract is purposeful and can make or break a deal, relationship, or lawsuit. However, even when we artfully draft and negotiate contracts, our implicit biases can seep in. These biases can cause us to communicate unintended (and sometimes offensive or unfair) messages to the other party that can put the relationship at risk.

Throughout my career as in-house counsel, I negotiated hundreds of contracts on behalf of clients residing outside the U.S. and with opposing counsel or counterparties from non-English speaking jurisdictions. The one common thread I noticed across all of these international contracts is that they were always – 100% of the time – drafted in English.

“English is used in contracts around the world, not just contracts between companies from English-speaking countries.”[2] When the parties’ level of command of the English language differs, and the contract is drafted solely in English, the parties automatically start on uneven footing. Without a full grasp of the English language, how can the international party fully understand the contract or fully advocate for their client’s position? How can they fully comprehend and deliver on your ask? And when the English-speaking party notices this inherent difference, is that knowledge used for good or trickery?

Recently, there has been a heightened focus on inclusivity, equitable workplaces, and addressing systemic biases.  Good companies have recognized that eliminating common biases in the workplace is business-critical. Customers are demanding heightened awareness from their vendors. Even in-house legal departments are expecting outside counsel law firms to align with these values. But are our contracts keeping up with the movement? Or are we letting implicit biases go unnoticed in our contracts?

Unfortunately, the legal community has done little to address implicit biases in contracts and contract negotiations. But it’s never too late to start. In this article, I will address how to spot and solve implicit language bias in international contracts.

How to Spot Language Bias in Contracts

Language bias occurs when the contract drafter assumes the other party is as fluent in English and English “legalese” as the contract drafter. If you’ve ever thought this to yourself, “Wow, their English is surprisingly really good!” then you probably have implicit language bias. While many international parties are English savvy and can get by with the basics, the type of English used in contracts (as many of us can attest) is not always straightforward or intuitive. Sure, I can speak conversational Spanish and tell the Uber drive where I want to go. But that doesn’t mean I’m prepared to negotiate a contract in Spanish. Plus, even if you know conversational English, English legalese is arguably a language all its own.

When contracting with an international party whose native language is not English, contract drafters should be on the lookout for these signs of language bias:

Allowing language bias into your contracts may communicate to international parties that their understanding of the contract is not important to you. In the long run, this can lead to a lack of trust between the parties, ambiguity in interpretation or enforcement if a dispute arises, and a perpetuating feeling that one party is considered superior to the other.

How to Solve Language Bias in Contracts

Contracts are the medium by which human relationships, ideas, and expectations, are brought to life and maintained over time. Therefore, contract drafters need to be mindful of implicit biases that can arise in contracts and contract negotiations. The result will be better contracts, deeper relationships, and furtherance of the principles of diversity, equity and inclusion.

[1] In the context of this article, “contract drafters” includes attorneys, contract managers, procurement specialists, or lay business persons – whomever is drafting and negotiating the contract at hand.